HISTORY OF THE SOUTHEASTERN CONSORTIUM FOR DERMATOLOGY 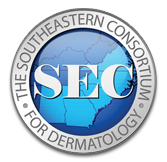 The SEC has its roots in the Virginia-Carolinas Dermatological Society (VCDS), the brainchild of Dr. Peyton Weary of the University of Virginia. Started in the early 1970s, the VCDS soon grew under the guidance of Dr. Weary, Dr. W. Mitchell Sams, Jr. of the University of North Carolina, and other founders to include academic dermatology departments from Virginia to Georgia. The first annual meeting of the new, larger SEC was held at the University of North Carolina in 1977. This geographic expansion necessitated a name change for the organization and thus was born the Southeastern Consortium (SEC) for Dermatology. 1987, the Charlotte Dermatology Association (all private practitioners!) volunteered to host the SEC meeting when none of the academic institutions were able to host. In recent years, the SEC has extended its reach with the addition of the University of Alabama in 2000 and Eastern Virginia Medical School in 2002. Today the SEC is composed of ten sponsoring departments of Dermatology.

From the beginning, the SEC was designed to bring together dermatologists from academia and community practice from throughout the region. Originally, it was intended that meetings be held no more than one day’s drive from the homes of the members, though later expansion eventually put an end to that notion. Meetings were to be less formal than larger, national meetings. Both live-patient viewing and didactic lectures have been part of the program from the outset with the format of Friday afternoon and Saturday morning for the didactic lectures and Sunday morning for the patient presentations. Speakers for the meetings are primarily drawn from the membership of the SEC.

In 2002, the Steering Committee developed Administrative Regulations to help provide both a historical perspective and uniformity of meeting format practice for each hosting site. In 2004, the first additional half day site-based workshop was hosted at UAB and a half day path review course was initiated in 2007 by VCU/EVMS: these are held at the discretion of the hosting institution. In 2007, the SEC donated $5000 to the Dermatology Foundation to support research relating to medical Dermatology. In 2009, an SEC website was added to provide information on meetings for potential attendees and to house the historical and financial records of the group.

In 2018, the SEC became a 501-C6 nonprofit organization and in 2019, organized all the participating institutions into a formal consortium with both educational and financial responsibilities. In 2019, the newly formed Board of Directors of the SEC replaced the Steering Committee of the SEC and elected officers. The first officers of the SEC nonprofit organization are Elise Olsen, MD, President, Sarah Chisholm, MD, Vice-President, Art Saavedra, MD, PHD, Treasurer, and Loretta Davis, MD, Secretary. Bylaws were written and adopted and new Annual Meeting Guidelines replaced former Administrative Regulations.

The 44th SEC meeting was held virtually in the Fall of 2021 due to continued restrictions related to the COVID-19 viral pandemic. The 45th annual meeting, hosted by the University of North Carolina, will return to an in-person conference in October 2022 .